I open my bag for my notebook and pen and the smell of tiger balm jumps out at me. With the movement of walking, the jostling and searching for things blindly, the lid had unscrewed from the pot.
Today I came to the park around 16:00 and walked quickly around the lake - first with my jacket on, then with it off. Having not fully completed my second lap, I go to sit on the lower level of the perimeter, at the top of the concrete and stone bank that eases down into the lake. I place myself there, close to the water, facing the water, the half way construction looming beyond. I watch people on the other side perform their daily exercise, their personal rituals, walking, running, playing and cycling. The distance between emphasising the patterned choreographies and syncopation of movement.

I put on my headphones and press ‘record’.

Behind me people pat pat patter past, the sonic traces and paths they carve forming bodies and action in my ears. Foot hits the ground, different kinds of shoes and slippers, dog claws clack clack clack, and bicycle wheels tick tick tick tick turning. To my left, a woman sits gazing out across the water in meditation. We share the same view. She arrived a few minutes after me, smiling warmly as we caught each other’s eye. An increase in birdsong with the hums and honks of traffic, and the two increasing and going along together, both vehicles and birds performing their evening songs. The sound of a flute comes from somewhere behind me to the right. And someone moving with a plastic bag held loosely in hand passes from right to left, its soft swinging rustle suggesting age and use and thinness and transparency. My eyes follow my ears to the right arriving to an older man teaching his three year old granddaughter how to squat - exhaling sounds of encouragement ‘ahh’ (inhale) ’ah’ (inhale) ’ahh’ (inhale) ’ahh!’ (inhale) with each up and down, dipping into the well of excited efforts of the girl who is trying to join in. Completing their sets, they run off around the lake. The sighing shoes of a elderly man phoof phoof from left to right crossing paths with the melodic voice of a young woman chattering hands free from right to left.

Juggling channels of listening, moving my zoom from side to side, fountains and cicadas enter my ears. Rrriting! phad phad phad phad phad Rrriting! Rrriting! phad phad phad phad the duet of a young boy’s bicycle bell making way for his father jogging in tow. His keys chiming with motion and meeting in harmony with the clatter of chains emanating from the workout area near the park entrance.
At 5pm, the practice of Falun gong begins. Lining up along the lakeside to my left and stepping onto circular mats (made of foam, cardboard, tarpaulin or other things), the people follow a Chinese style tune of stringed instruments, flutes and gongs and gently paced voice of instruction into meditation. From the right I hear the sweet smooth voice of a young man singing to his partner as she giggles. A boy dragging two badminton rackets, one in each hand dekedekedekedekedekes cutting through the peaceful ambience and snaps me out of my wistful state. In the distance, the familiar dun, dun dun du dunn, dun dun du dunn, dun dun du… of vinahouse as women do their frenetic aerobic exercises.

A female student crosses my path left to right (the way the majority go) reciting a text, perhaps some homework she has to perform in class or foreign language practice. The content of the words is swallowed by the distance between us. Just the higher frequencies of …….s………s……s….s……..sss…..ssss and clicking of the tongue between words and in preparation for the next and the sheet of paper held tightly in hand are audible. The call of a street seller travels across the wider soundscape of the city, flowing from everywhere and nowhere at the same time. Different kinds of footwear, wheels, materials, activities, species, all sounding together in the place I position myself. As the motion of the walkers go round and around and around so too does the soundscape circulate the lake, belonging to the locale, grounded to this area surrounded by permeable walls, seeping in and out of immediacy and what is inside and what is outside? A crunch crunch crinkle of popcorn eaten out of a foil bag. Dry leaves scatter with wind and spot the concrete tiles and picked up and played with and twirling around. The cries of children and babies out of glee or frustration and the soothing aaaawwww ahhhh ha ha ha of grandma or mum. Footballs doofff and putf putf putf kicked and dribbled along. The coughing and exhaling of exercise and the thump foooooooooo step step thump foooooooooo step step thump fooooooooo thump fooooooooo step step of the woman who circumscribes the lake while improving her circulation. 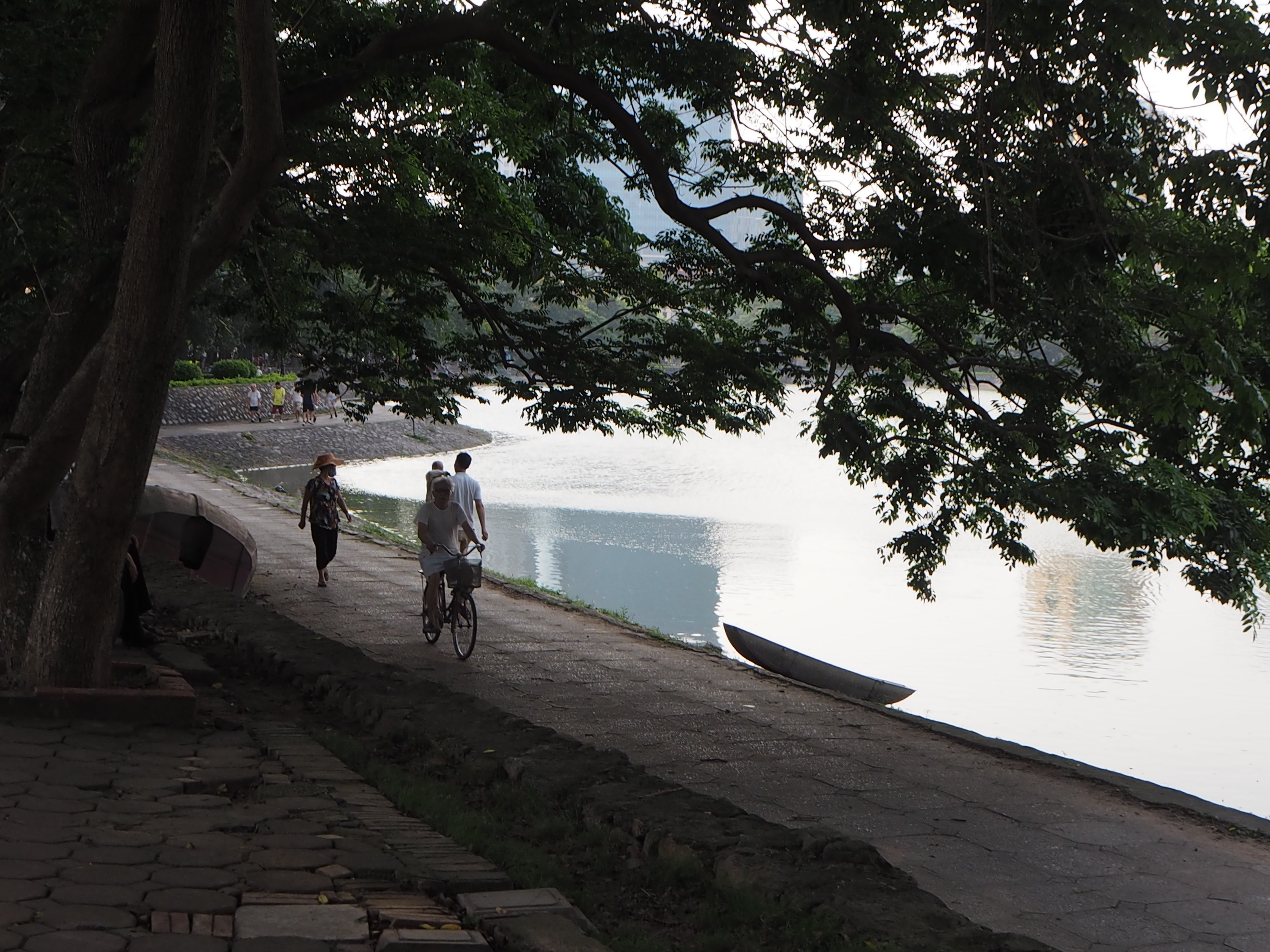