What’s your name?
"Lương."
How long have you been living in Hanoi?
"25 days."
Where are you from?
'Vĩnh Phúc."
Apart from bánh đa kê do you normally sell anything else? Also she wanted to ask why you use the speaker instead of your own voice? "Well if there’s a lot of bánh đa kê to sell it would be too tiring to use my own voice all the time."
Where did you get this recording from?
"From other sellers of bánh đa kê. I choose the ones that I like."
Meaning you recorded their voices or you got the recordings from them?
"The latter. I would ask to copy their recordings into a memory card, then I got this portable speaker for playing the files with."
Which areas do you normally sell bánh đa kê in?
"Many – from Âu Cơ to here, then down to Bạch Mai, all throughout the city."
Where did you get this speaker from?
"In my hometown."
Any particular reason why you chose to buy this speaker?
"No. I’ve always used speakers. Again, saves a lot of effort."

She says you’re pretty. You should’t cover your face like that.
"I’d get totally sunburnt though."
"I have so many Westerners taking photographs of me... The other day outside Thủ Lệ (the zoo) there was this group of Westerners who asked me to help them cross the street. So I walked back and forth, three times! Then they gave me 50,000."


What’s your name?
"…oh this is just too much hassle. I don’t want to be on TV!"
No you wouldn’t be on TV, we’re just asking for some information.
"Yea? My name is Đinh Thị Mý. I’m from Hưng Yên, have been in Hanoi for 20 years now, also been selling these pots and pans things for 20 years."
Why do you use this recording instead of your own voice?
"Just to protect my voice! It’s just much more convenient this way and also easier to attract people’s attention."
Where did you get the recording from?
"We recorded ourselves, using a recorder. Then we had this memory card to use with the speaker."
Which areas do you normally sell in?
"Everywhere."
Any in particular?
"Around here for instance."

This girl here is making a film, can we ask you a few questions for the film?
"No. I don’t want to be on TV. But photos are fine. A while back Trần Lực (a famous Vietnamese filmmaker) posted my photo on his Facebook – I run into him all the time in Làng Yên Phụ area – but people said too many things, one even commented that I looked like Đinh La Thăng’s younger brother."
Can you show her the speaker? She’s doing some research.
"There’s the speaker. I downloaded the recordings from the Internet.. there’s everything online."
Where did you get the speaker from?
"From my hometown in Nam Định."
We ran into somebody from Nam Định the other day.
"Yes, the people doing these kinds of things are all from Nam Định. They’ve been coming here to Hanoi for a really long time, learning things from the Chinese – even this came from the Chinese; we follow the process as taught by the Chinese, but those who have been to China said the original thing in China is still somehow better, perhaps there’s a particular ingredient that they add there. Many other things we also got from the Chinese when they started settling here during the French colonial times."
What’s your name?
"I’m Dân."

(What do you call this in French? Etc etc. My French is very good.)
Hi can I have one please?
"Sure. 10,000."
Can I ask you a few questions?
What’s your name?
"Thuận."
Where are you from?
"Nam Định."
Is that so? We’ve ran into quite a few Nam Định people.
"Indeed. Nam Định is still very poor, so many of us have to go to big cities to make a living."
How long have you been living here?
"Nearly 30 years now – 27, 28."
Do you only sell tào phớ or something else too?
"Just tào phớ, for 28 years now."
Which areas are you normally in?
"In general us street vendors go everywhere. Normally in Ba Đình and Hoàn Kiếm districts, the two central areas of the city."
She wants to ask about the recording – did you buy this from somewhere or you recorded yourself?
"Yes I had to buy. It helps make it less tiring for me."
And they recorded everything into USB drives like this?
"Yes, then we buy the speakers and the drives."
Where did you get these from?
"Nam Định. City people don’t do this kind of stuff (street vendoring) so they wouldn’t think of making the recordings."
We met another guy from Nam Định earlier, he downloaded the files from the Internet himself.
"Yea we generally do everything ourselves."

"Where did that kid go? Probably went to get the money.. Kids still like this kind of stuff very much, but their parents are worried it’d make them fat."

What’s your name and where are you from?
"Tạ Duy Bình, from Xuân Trường, Nam Định."
How long have you been in Hanoi?
"A bit more than 10 years."
Apart from this do you sell anything else?
"Just this electrical stuff."
She’s curious about the recording and the speaker?
"Ah.. I bought the USB drive from somewhere."
Where in particular?
"People just pass this stuff around."
Can you choose between different types of recordings or types of voices? "There was just this recording for this type of good, but of course there are recordings for all types of things. Makes it easier for us street vendors when we go around."
Which areas are you normally in?
"Long Biên and […inaudible …], I’d get to here (Yên Phụ) around noon then go home for lunch."
Do you live nearly?
"Not really, I rent a place in Hào Nam."
That’s far isn’t it?
"Indeed, but I’m not used to vendoring in that area."
Do you have to register with anyone?
"No. But if you go to a new area of course you have to see what it’s like there first..

What’s your name?
"Đặng Văn Trường."
Where are you from?
"Nam Định."
How long have you been living in Hanoi?
"Since 1997."
Can you explain what you’re selling or buying?
"I buy [… inaudible but we can see it's scrap metal …]"
Why do you use this recording?
"Just so it wouldn’t be so tiring."
Which areas are you normally in?
"Around the Flea Market and Huế Street."
And where did you get the recording from?
"In the Flea Market."
Home 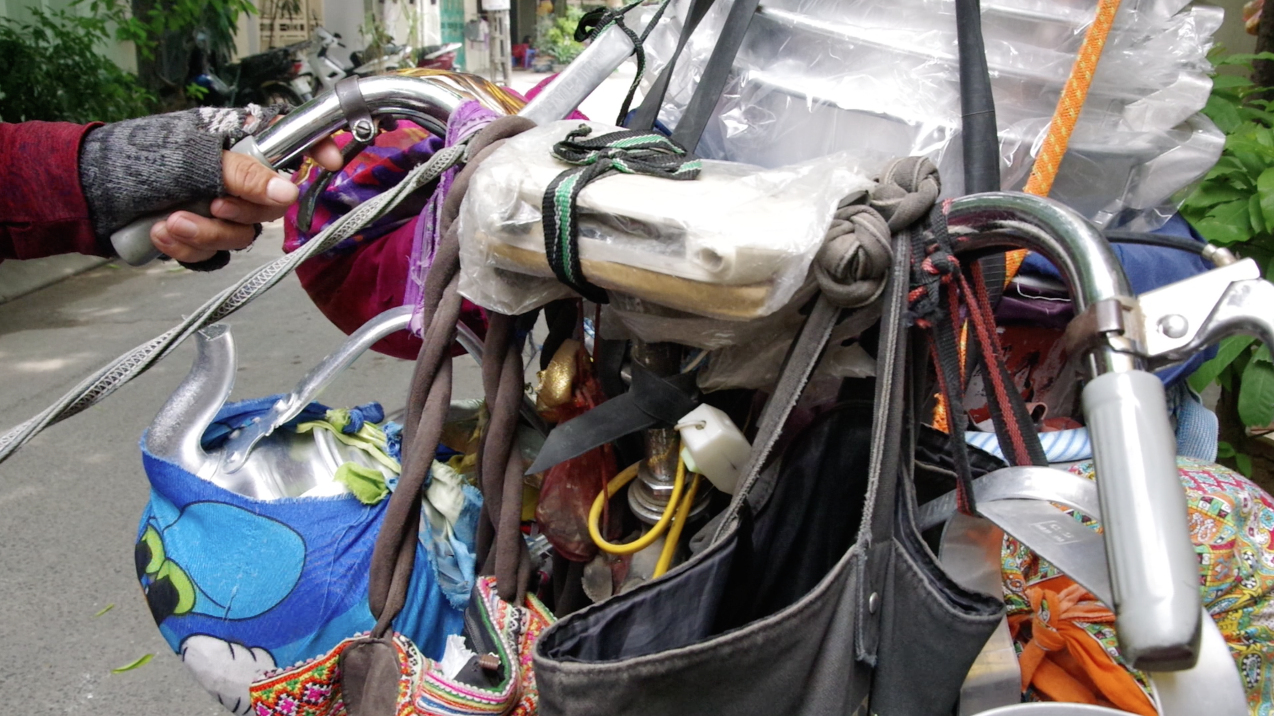 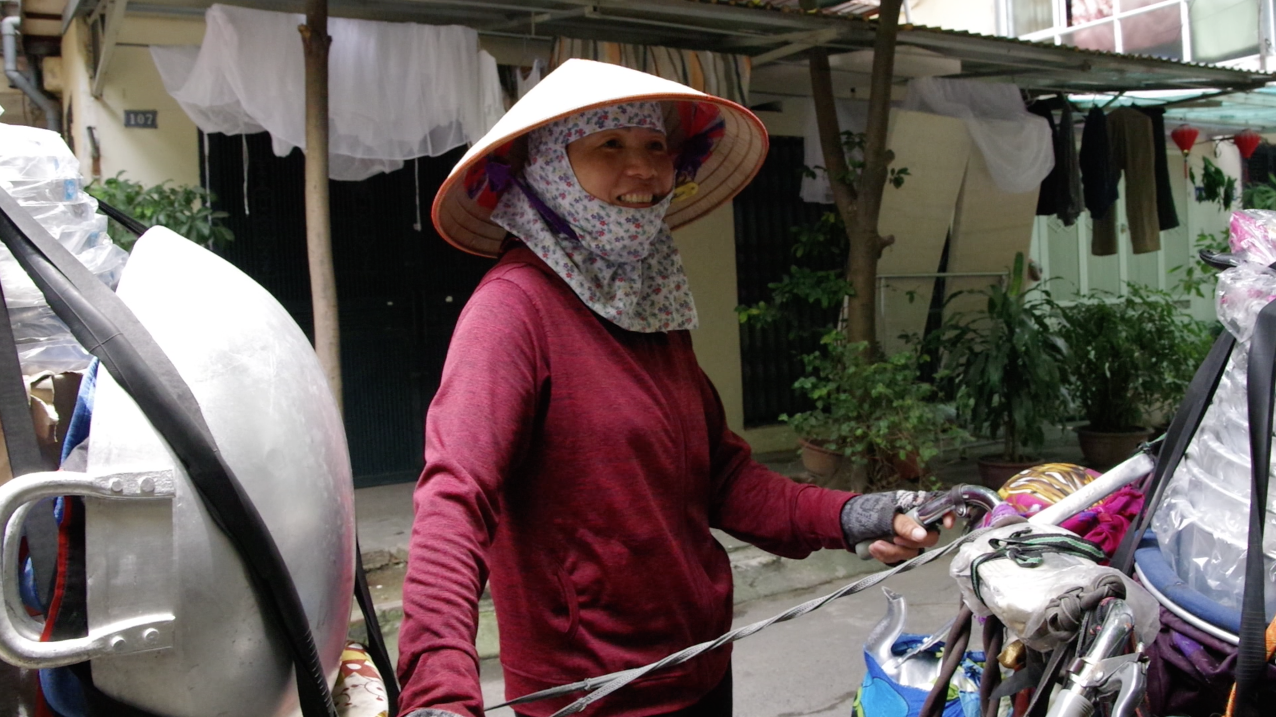 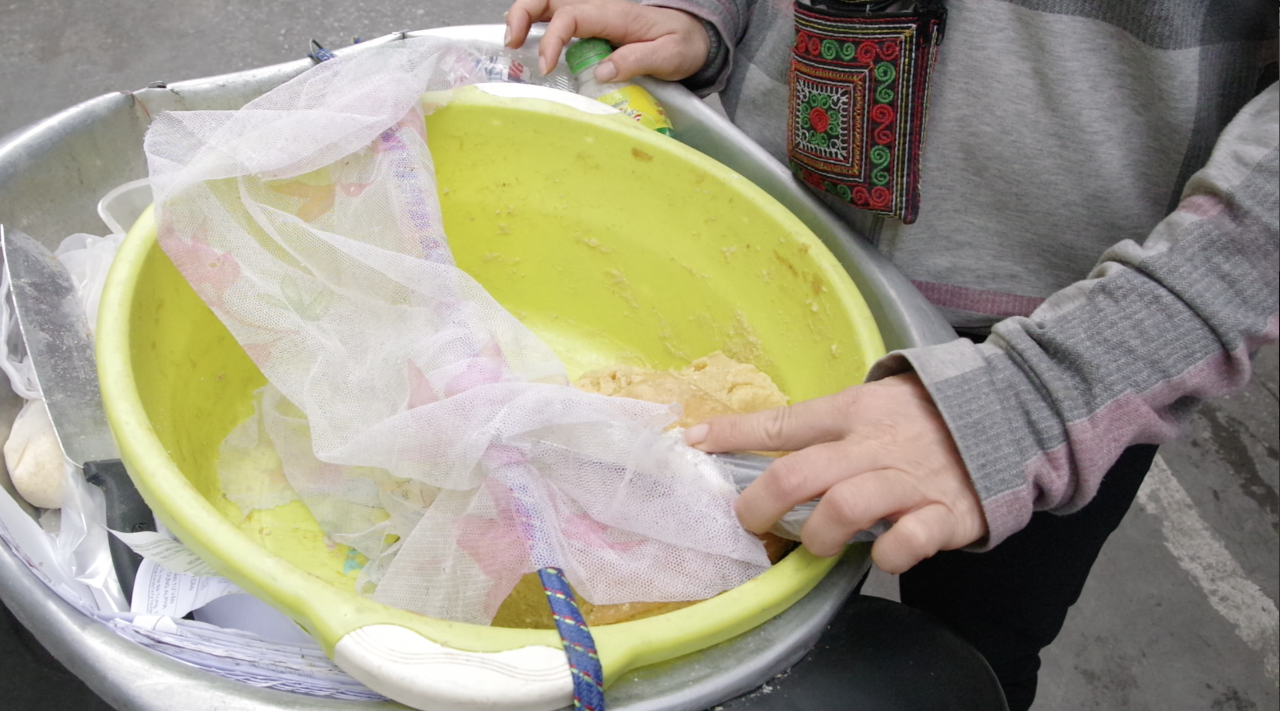 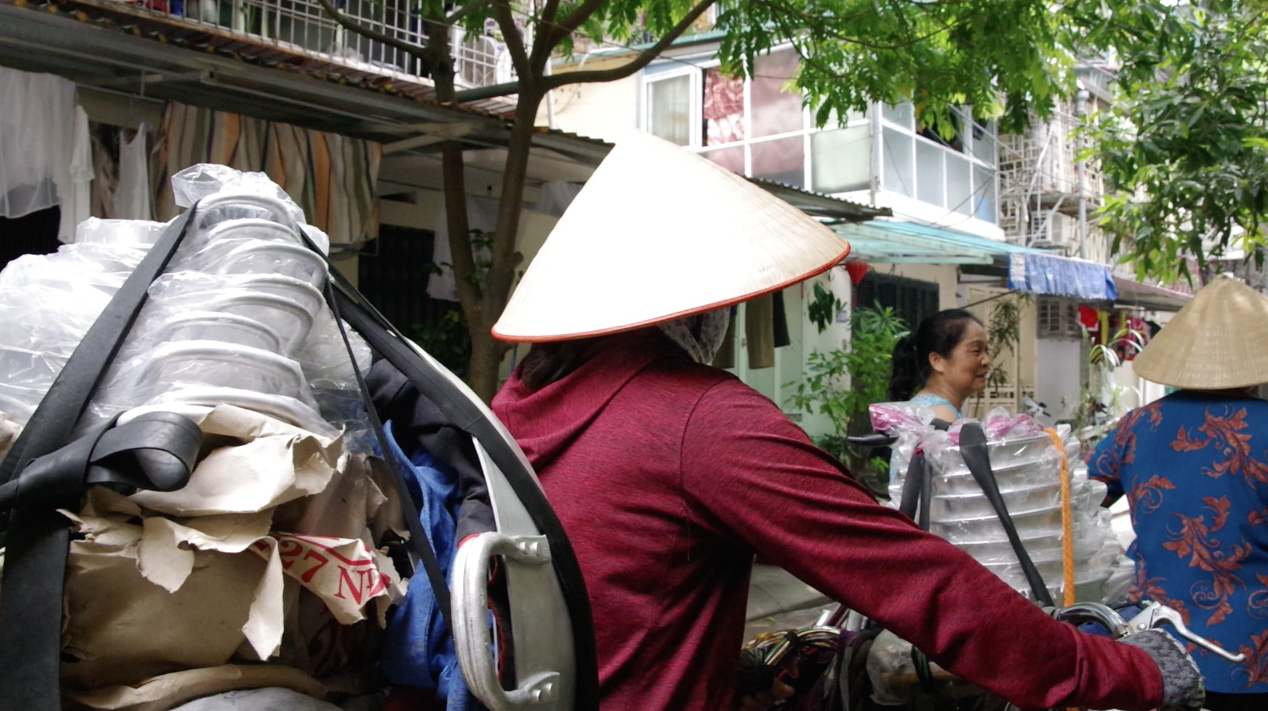 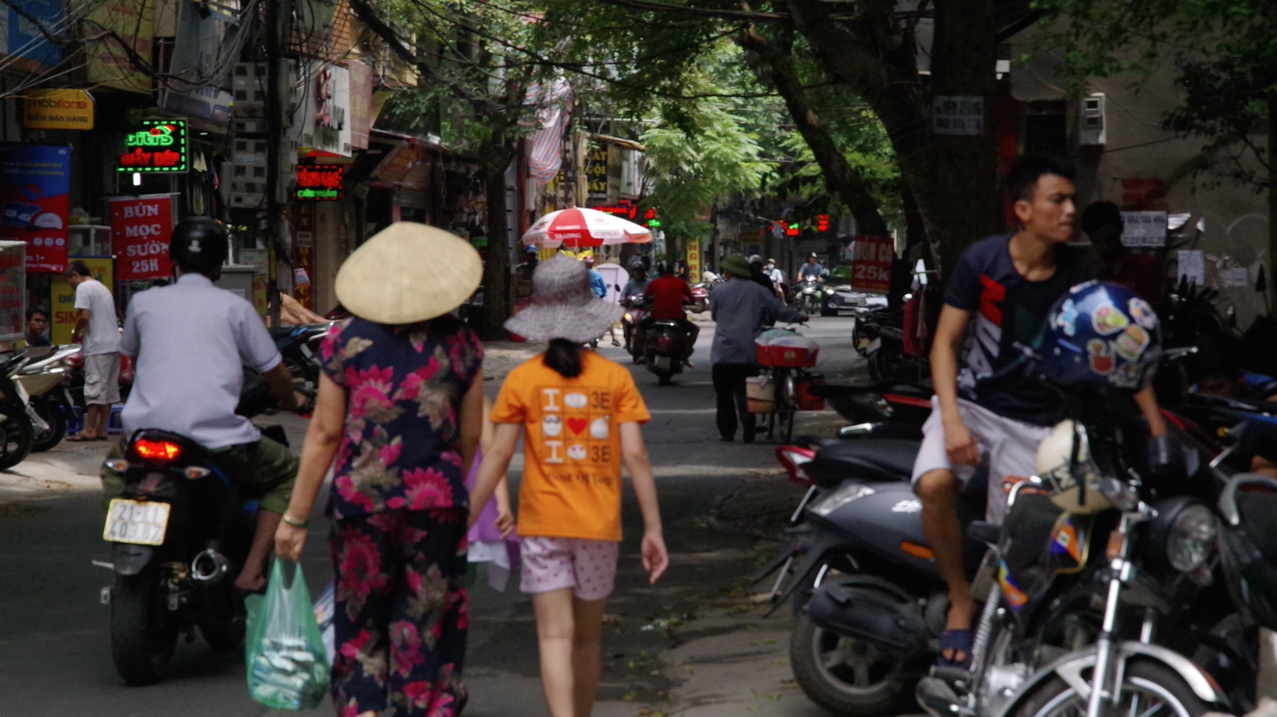 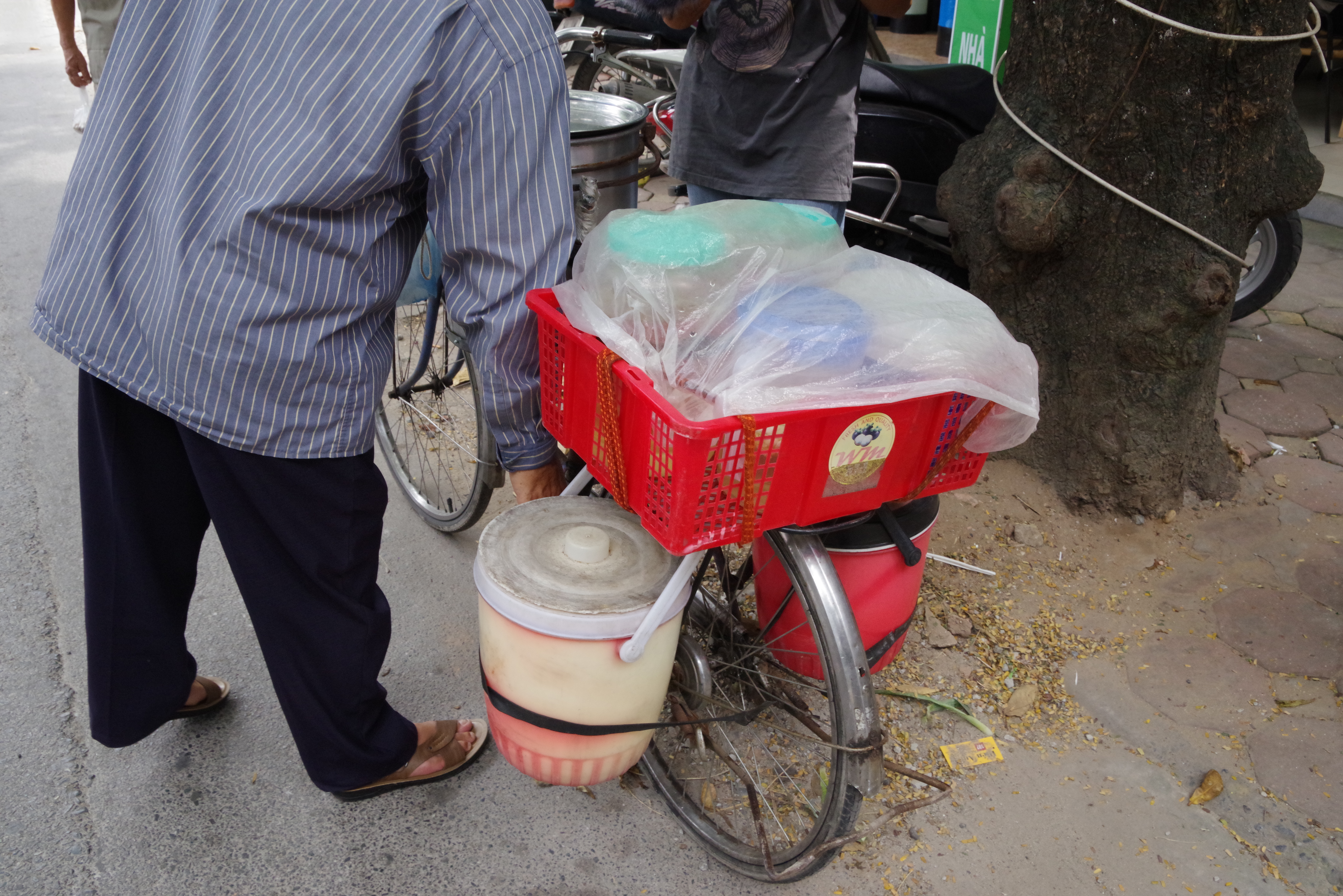 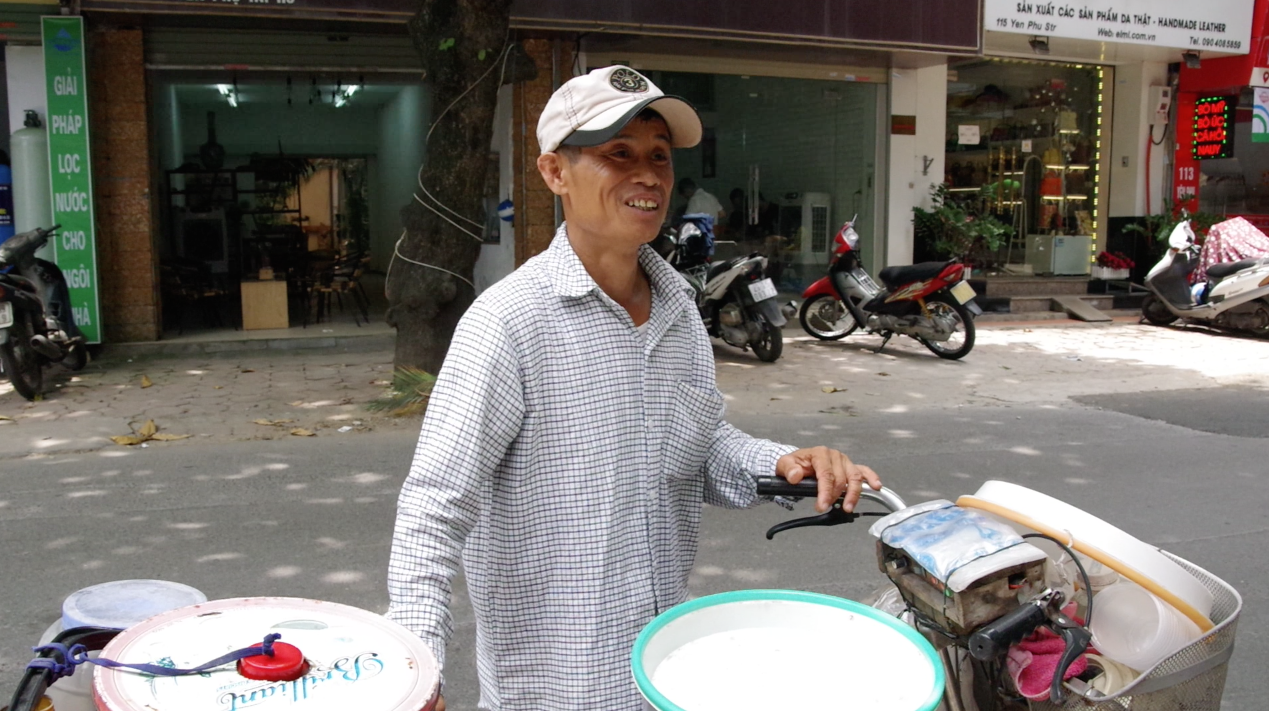 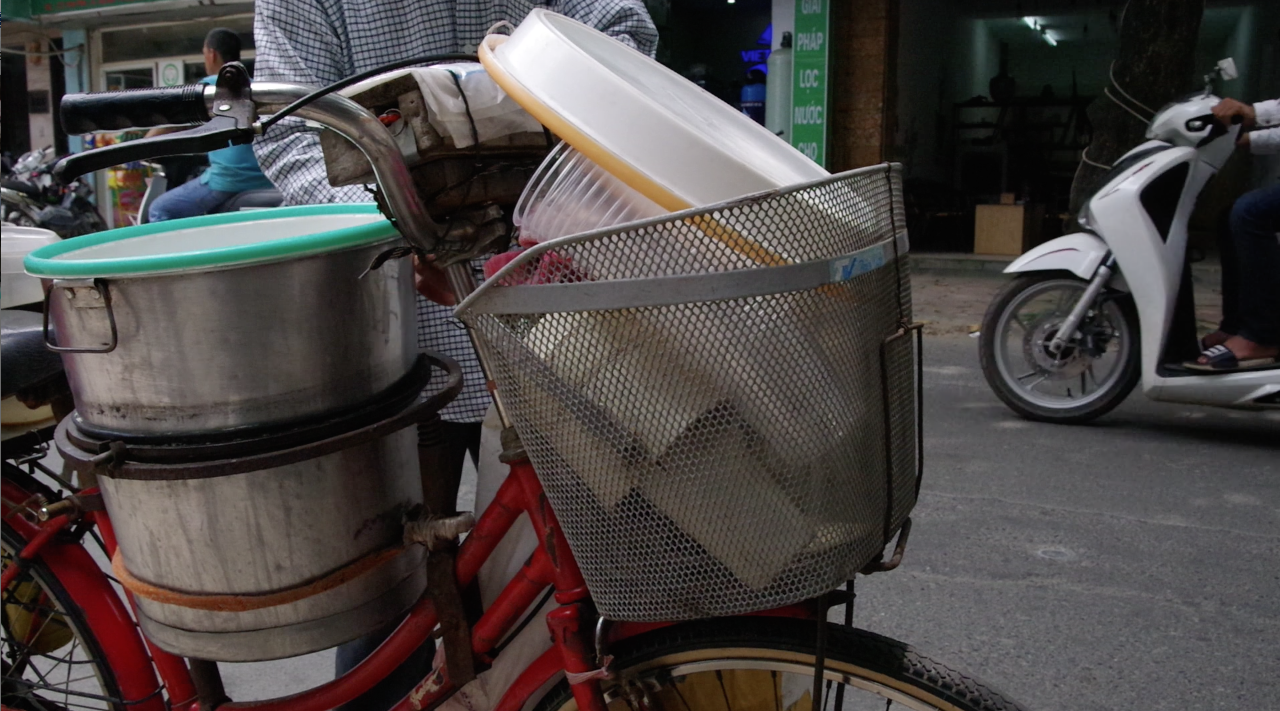 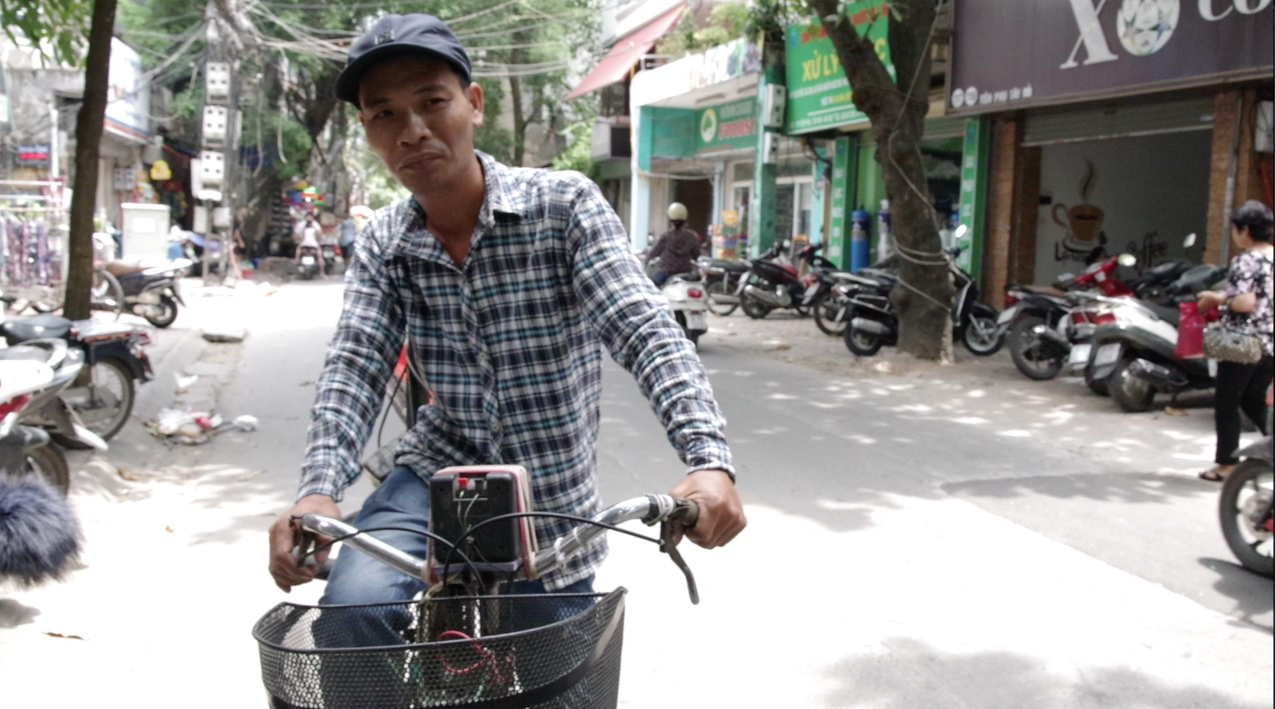 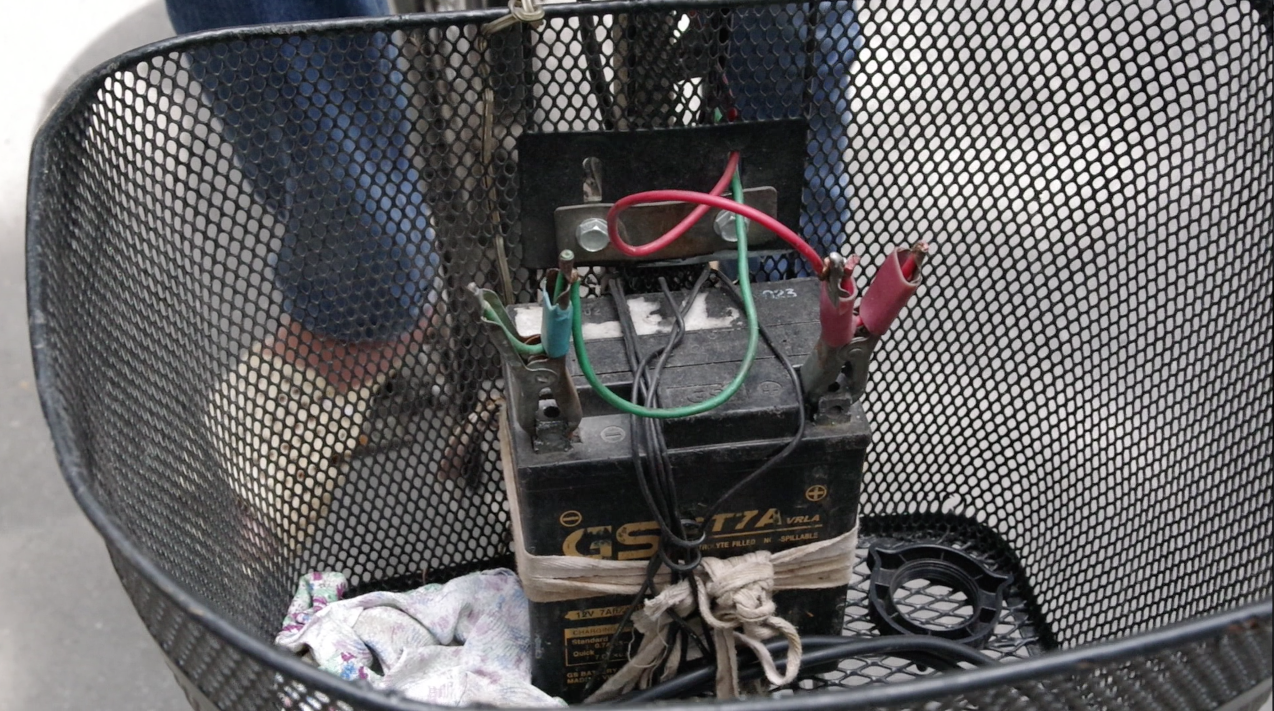 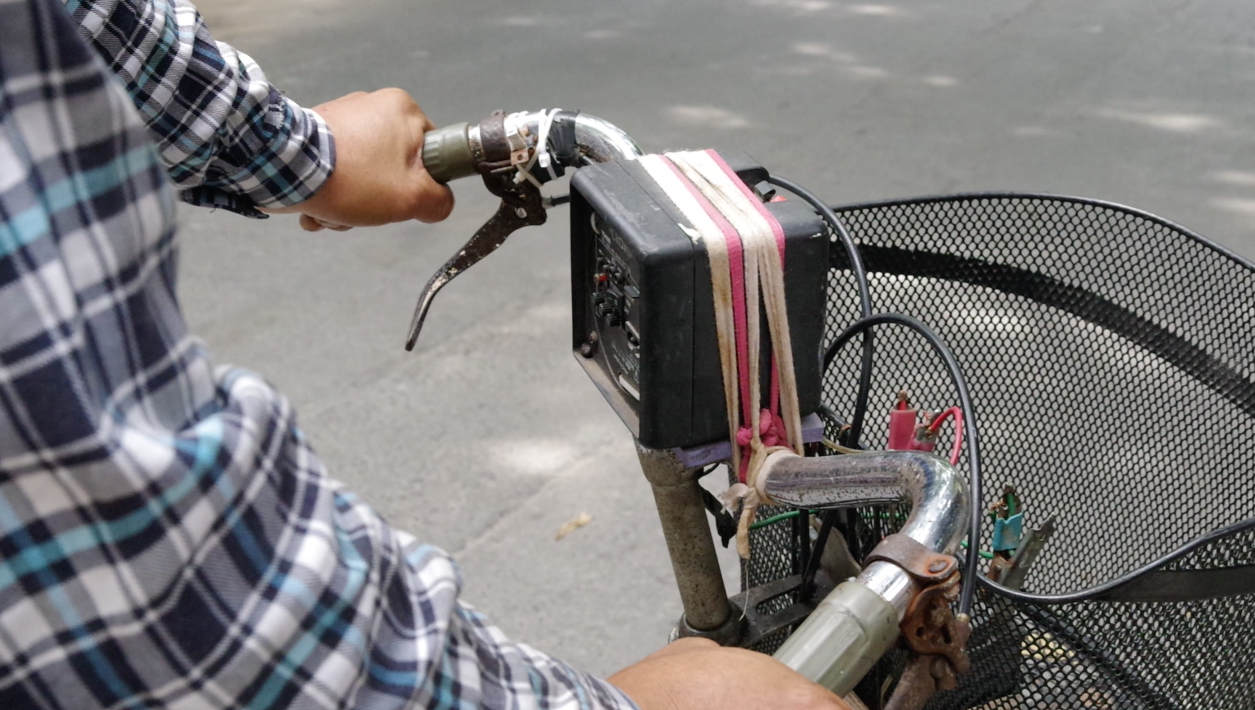 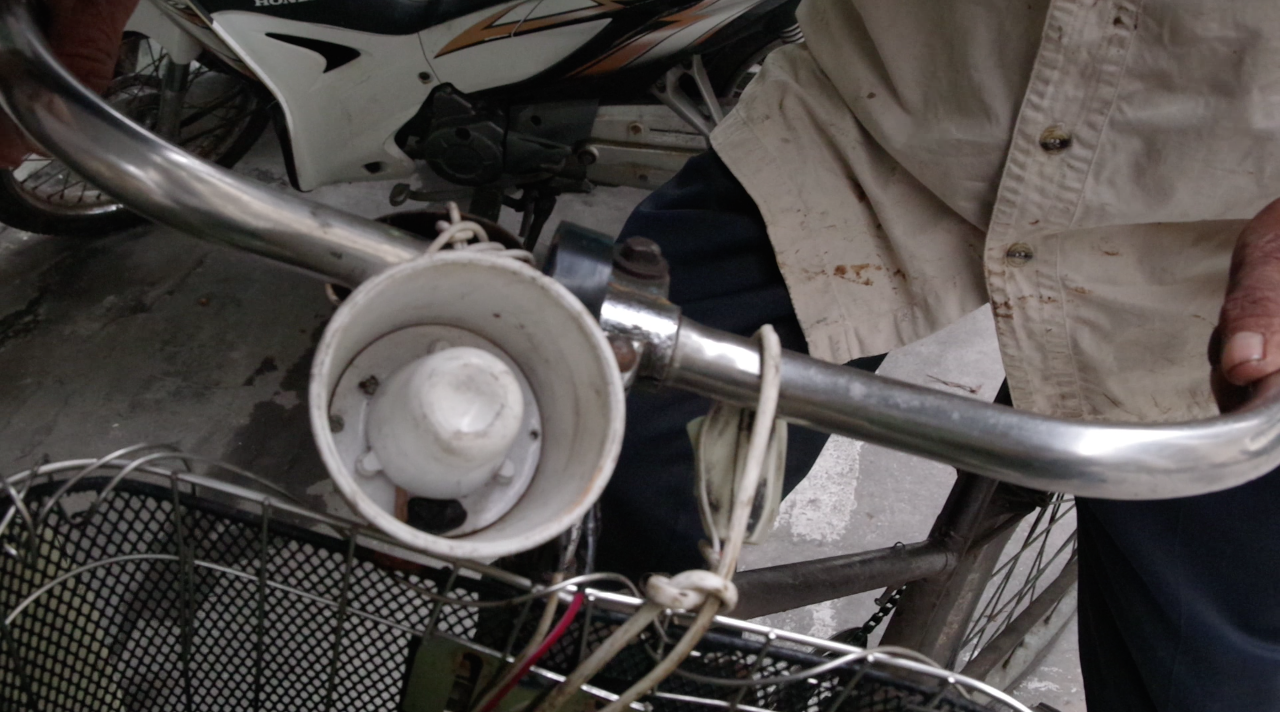 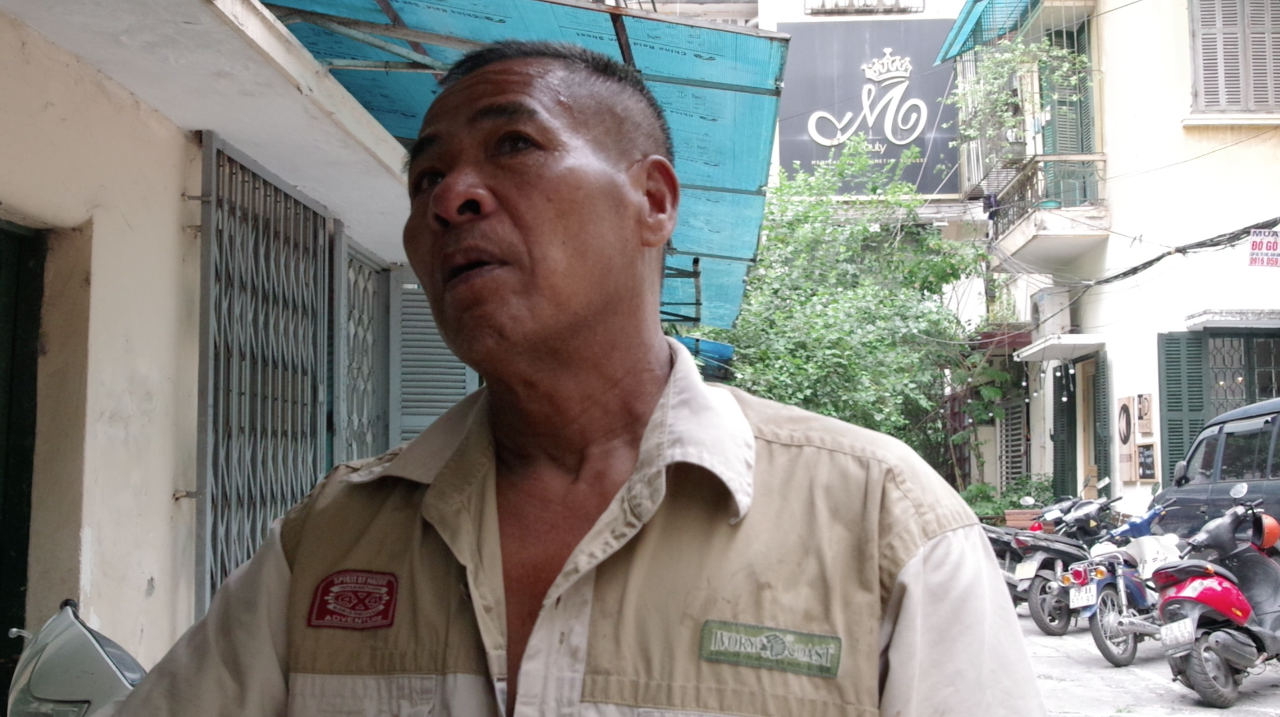